You might have heard about female ejaculation and wasn’t sure if it was true or just a myth.
Or maybe you had a similar experience and didn’t know how to explain it.

Female ejaculation can be a new orgasmic experience.

When some women get really aroused, they might expel liquid from their urethra or vagina in quantities that range from a few drops to a cup-full.

There is a lot of debate in scientific circles about the nature of this liquid.

Some scientists claim that female-ejaculation is urine and that it is caused by urinary incontinence. I do not agree.

There are a few kinds of liquids that a woman can expel from her genital area:

2. Urine – Some women simply urinate when they are really aroused or when they experience a strong orgasm. That’s partly because the strong muscle contractions can cause a woman to pee and because they relax and surrender into the experience.
Society regards pee as a waste product and there’s a lot of shame concerning pee. There is actually no problem with pee. It is even used by yogis as a form of natural medicine which is ingested or applied to the skin. I have been drinking my urine nearly every morning for most of the past 9 years, and I believe that’s one of the reasons that I’m hardly ever ill. To know more, google urine therapy or amaroli.
Ejaculating urine is pleasurable and often undistinguished from other kinds of female ejaculation. There is also a feeling of release and letting go. 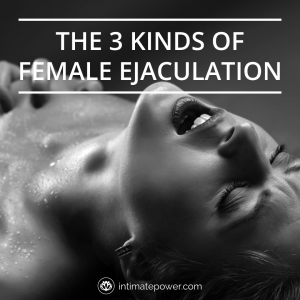 And then there are three kinds of female ejaculation:

1. Thick female ejaculation – this is a thick, slightly milky, odorous fluid which is sometimes expelled after strong clitoral stimulation as a side-effect of an explosive orgasm. It’s usually expelled in one strong “gush”. It doesn’t smell or taste great. After the “ejaculation”, the women often becomes hyper sensitive in her clit, feels content and doesn’t want to continue. This is the closest substance to male ejaculation in terms of the energy loss. Women do lose energy when they produce this liquid. As mentioned earlier throughout the book, clitoral stimulation is great, but clitoral orgasms don’t serve you as you lose vital energy and go into a roller-coaster of emotions.

2. “Real” female ejaculation – This is a clear, light liquid that smells and tastes slightly sweet. It sometimes also smells a little bit like urine as there might be traces of urine in it. But if you compare it to your urine before and after the sexual experience, you will notice that it looks, smells and tastes completely different. Some scientific studies have described this liquid as a diluted form of urine without the element of Ammonia, which gives urine it’s characteristic pungent smell and taste. It might be expelled from the urethra and/or the vagina. Some claim that it’s expelled from small openings near the vagina called “Bartholin’s gland” and “Skene’s gland”, but I personally doubt that this is the main source of the liquid.

The liquid is not viscous at all, and thus actually decreases vaginal and genital lubrication. This form of ejaculation is related to G-spot stimulation and orgasm. Sometimes ejaculations are accompanied by pleasure and orgasm, and at other times you might ejaculate without experiencing orgasm or even pleasure.

In Tantra, this liquid is called “Amrita” which means something like “divine nectar”. The tantrics consider that sexual energy is transformed into liquid which is expelled from a woman’s vagina. However, according to the tantrics and my own experience, there is no loss of energy during this ejaculation and women can keep ejaculating and/or orgasming for long minutes. This liquid is actually charged with energy and some claim it also has some psycho-active effects. It is recommended that the woman and/or her partner ingest this liquid or apply it to the skin.

3. Cervical ejaculation – There is a rare kind of female ejaculation which is expelled from a woman’s cervix in very small quantities (a few drops) and is milky and sweet. It is considered the most refined and sublime form of female ejaculation and is related to deep cervical-uterine orgasms. It often goes un-noticed in the heat of the action and among all the other fluids.

There are three ways that a woman can ejaculate:

2. A better way to ejaculate is to learn to squeeze your vaginal muscles. Some women can ejaculate nearly at will when they are very aroused.

3. Some women ejaculate without strong stimulation and without squeezing their vaginal muscles. Their pleasure or orgasm induces natural vaginal contractions that create female ejaculation. I’ve met women who ejaculated while dancing, looking at a man’s eyes or simply meditating.

Some women produce so much liquid that they can easily destroy a mattress. Always keep plenty of thick towels next to you when you masturbate or have sex. I’ve heard about a couple who had to make love in an inflatable kids pool. That was the only way to contain the vast amounts of liquid.
If you are an ejaculator and you make love with a new partner, try to tell him in advance about this, and explain that it’s a symbol of your pleasure and trust in him. Most men aren’t aware of this phenomena and think that a woman is peeing on them.

Start a self-pleasuring ritual, get yourself really aroused and stimulate yourself vaginally. Notice if your g-spot becomes engorged, or if you have a feeling of needing to pee when you are stimulating your g-spot.

If you have a partner or a lover or even an open-minded friend or girlfriend, they can give you a Yoni massage and use these techniques to help you ejaculate. It’s much easier for someone else to do it because of the easier access to your vagina.

I would recommend practicing it both by yourself and with another person, if that’s possible.

My soon-to-be-published book will include a few more exercises that will make it easier for you to ejaculate by yourself and with your lover.