Remember the last time you masturbated. 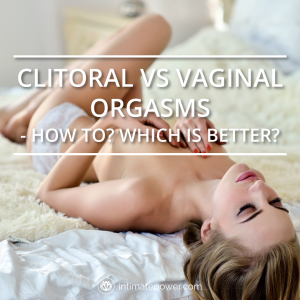 Did your clit become hyper-sensitive, uncomfortable, or unbearable to touch?
If you had the time to continue, why did you stop?
Even though you experienced pleasure and release, did you feel satisfied on a deep level?

I might be generalizing, but bear with me for a moment.

Many women describe a clitoral orgasm as an intense, short and sharp “peak”, followed by a very quick decline of pleasure, arousal and interest.

The build up is usually quite quick – some women can reach a clitoral orgasm in a minute or two, and the orgasm itself is brief, lasting for 10-30 seconds according to some studies.

The orgasm is pleasurable, but the pleasure feels kinda shallow.  The sensations, pleasure, and orgasm are mostly focused in the genital area.

During the few seconds of orgasm, there is some experience of letting go and release, but it’s more like an effort to release, to get rid of something, rather than expanding, or attaining.

Immediately or shortly after the peak of the orgasm, you might experience that the pleasure, arousal and interest drops rapidly.

The clitoris becomes hyper sensitive, and any touch feels irritating, “too-much”, sharp, annoying, uncomfortable, maybe even unbearable or painful. You might need to wait a few minutes, or sometimes even hours, before you are ready for more clitoral touch, or for another clitoral orgasm.

Later, you might feel satisfied to some degree, but it’s more like “done”, tick the box, had an orgasm, on to the next thing.

You probably wouldn’t feel satisfied on a deep level.
Some women might even feel hollow, depleted, dull, unfulfilled, sometimes even slightly depressed.

If you are with a partner, the orgasm will feel like “My Orgasm”, and you might lose interest in some way…
Still loving your partner, but somewhat less interested to be with them.

Ever wondered why?
Why is the orgasm so short and sharp?
Why does your clit feels pleasurable one moment, and unpleasant to touch the next moment?
Why do you still feel unsatisfied and empty later?

I will cover the science behind it in the next article, but, in brief, that’s because in a clitoral orgasm, you lose energy, while in vaginal orgasms, you retain and circulate that energy.

A clitoral orgasm is similar to a man’s ejaculatory orgasm:
A man becomes aroused quickly, his orgasm is brief (even shorter than a woman’s clitoral orgasm), and he immediately enters the refractory phase, losing his erection, and at least some of his interest in his partner. Falling asleep is not uncommon.

Back to female orgasms:

There is another kind of orgasm – a vaginal orgasm – caused mainly by stimulation of the G-spot, the cervix (the entrance to the womb), and the deep walls of the vagina.

When you have a vaginal orgasm, it feels totally different:

The build up is slower – You need more time to get aroused, more time for stimulation of your vagina. Your orgasm comes not so much from effort and “Trying”, but from trust, surrender and flow.
The pleasure feels more intense but “fuller” and “wider”, with more colors and tone, more depth and meaning.

If you thought clitoral orgasms were fun, you’re in for a treat!

The orgasm itself unfolds slower, lasts longer (or much much longer), and feels more round, expanded, all encompassing.
Even though the stimulation might originate from the genital area, the pleasure often emanates and spreads throughout the body, usually towards the upper areas of the body.

During and after this orgasm, you can continue to receive stimulation, without that unbearable feeling of “lay off my clit Now”.
Another orgasm is possible within minutes or even seconds.

But it’s not just about pleasure and orgasming – The surrender into the orgasm feels meaningful and blissful; you feel greater love and connection – with yourself, your partner, your life, and sometimes with the universe.

If you are with a partner, your orgasm will feel like “our orgasm”, like a gift you want to share, not a trophy you want to keep.

After some special orgasms, in the following hours and days you might feel echoes of that orgasm as vibrations, pulsations, sustained pleasure, or being swept by feelings of love and bliss.

And there’s even more.
While clitoral orgasm deplete your energy and your ability to be creative and successful, vaginal orgasms empower you as a woman, spark your creativity, charge your body, fuel your career, and enable you to connect deeper with your partner and with others.

The clitoris is easy to find, easy to arouse, and easy to orgasm from.

In comparison, experiencing a vaginal orgasm is a bit more complex;
It takes much more openness, willingness, and surrender on the part of the woman;
Patience, experience and persistence on the part of her partner;
And various situational conditions (lifestyle, health, lack of stress, ambiance)

I’m not saying that clitoral orgasms are a sin, or that they are bad, or that if you are only having them, there is something wrong with you.

It’s good to accept where you are at, and know that more is yet to come.

But just imagine:
What if you could experience the vast range of orgasms ? There are over 20 different kinds of them.

The clitoris is a sacred, beautiful, crucial part of a woman’s body and sexuality.

But it’s not the only place.

There is a vast uncharted blissful world in there, in your vagina, waiting to be found, yearning to be honored, celebrated, and awakened.

The real secret is how to allow intense and sustained clitoral stimulation, and be able to turn it into long meaningful deep orgasmic states, similar to vaginal orgasms.

It’s not just possible, it’s also easy for women to learn, and easy for men to help facilitate for them.

How to do it?
Read the next article in the series: Why clitoral and vaginal orgasms feel so different

How do clitoral orgasms feel different than vaginal orgasms for YOU?
Would you choose one over the other?
Join the discussion in the comments.