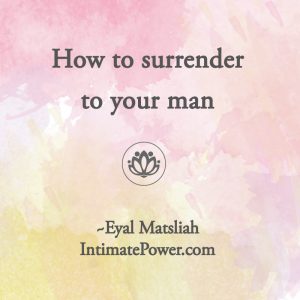 Aren’t you tired of making all the decisions, of having so many responsibilities, of needing to keep it all together?

Wouldn’t you love to be led and guided, at least sometimes?

Aren’t you secretly yearning to surrender to your man?

Maybe you want to surrender.

But you don’t know how to.

Where’s the button you press to surrender?

You’ve been told to be strong, to keep it all together, and not to trust anyone.

Recognize all the stories your mind is telling you, and just surrender.

Start with trusting yourself.
Trust that you are enough.
Trust your intuition.
Trust your body. 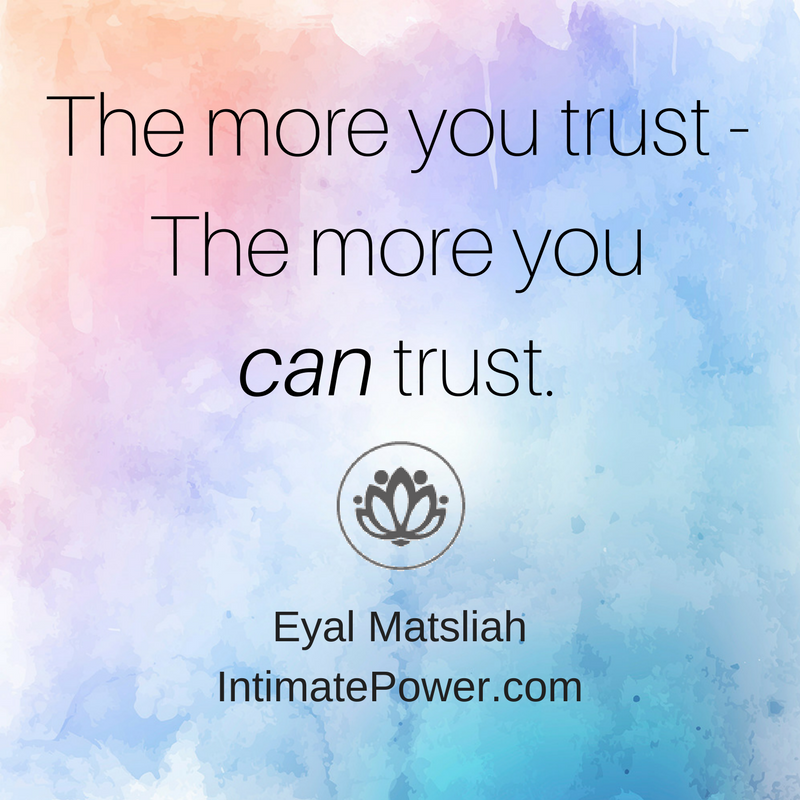 Maybe you’re taking too much on?

Let go of leading and guiding in any aspect of your life which isn’t crucial.
Instead, recognize where he has some experience and authority.
Ask for his opinion, ask for his guidance, ask him to decide and choose.
For you.
For both of you.

Let him order for you at a restaurant.

He might get it wrong.
Give him some hints and if you see he’s totally off course, just let him know.
Gently.
Lovingly.

If you’re a vegetarian on a first date and he’s taking you to have sushi, just let him know.

If he’s planning a ski vacation for your twentieth anniversary while you yearn to get some sun, sea and sand, just let him know.

But otherwise, let him decide.

You might be shit scared to surrender.
That’s ok.
But maybe there’s also a part of yourself that is excited to surrender?
Perhaps, once you surrender, you will be happier?

You can turn this into a game, an adventure.
For one date, one day, one vacation, one aspect of life, or one week, he makes all the decisions.

Notice how letting go of control actually makes you more relaxed, alive and even ecstatic.
Now that you don’t have to decide, allow yourself to shine!
Express your love.
Giggle.
Let your body sing and dance in response to every moment.

If he’s holding the space, you are the energy that fills the space.

Letting him lead and decide doesn’t make you powerless.
On the contrary.
It shows that you are powerful enough to surrender. 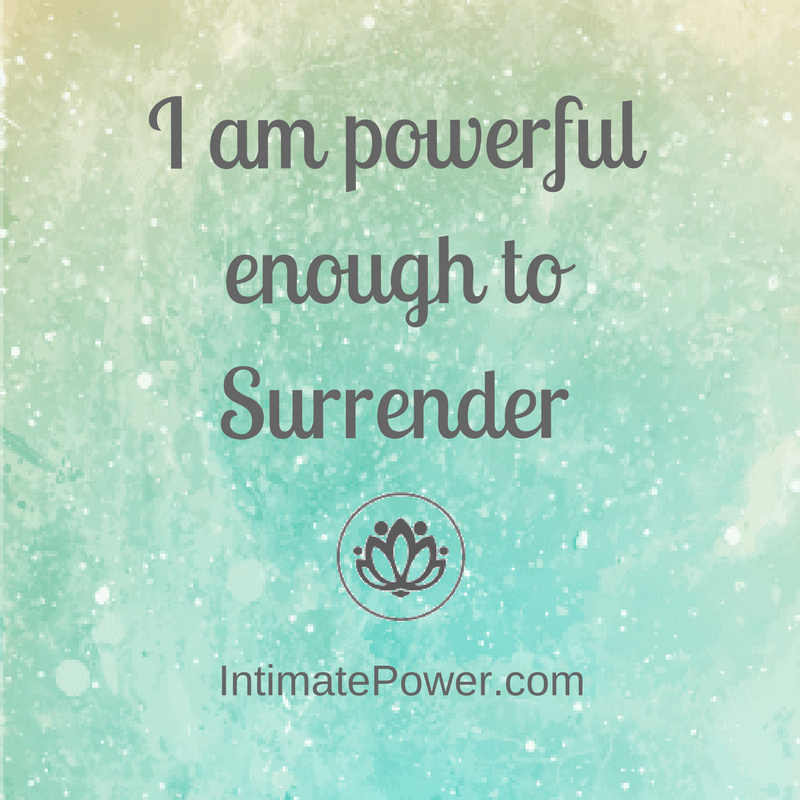 Express your trust and surrender in words.

Understand that he might be as fearful, confused and hurt as you are.
You are a woman, and he has no idea what that feels like.

Ask him to listen to you without needing to explain, justify or, most importantly, fix anything.
Share how you feel, how you really feel, but without accusing or complaining.
Notice that he might try to “save” you anyway.
Remind him he just needs to listen.

And then, let go of words.
Words keep both of you in your mind, in the ego, in the stories, in the past.

When you accept him as he is, without trying to change him, you can surrender to who he is right now.

Ask him to hold you and not say anything, not even try to do anything.
Don’t *tell* him.
Just ask.

Ask him to lie on top of you, and support himself on his elbows so he doesn’t crush you.
And then, relax into the feeling of his weight on you.

Recognize that you might be avoiding uncomfortable sensations, feelings, emotions, or expressions.
Don’t push.
Just allow yourself to go into that.
Express whatever arises.
Let go of whatever you express.
Trust that your man can hold that, and hold you in that. 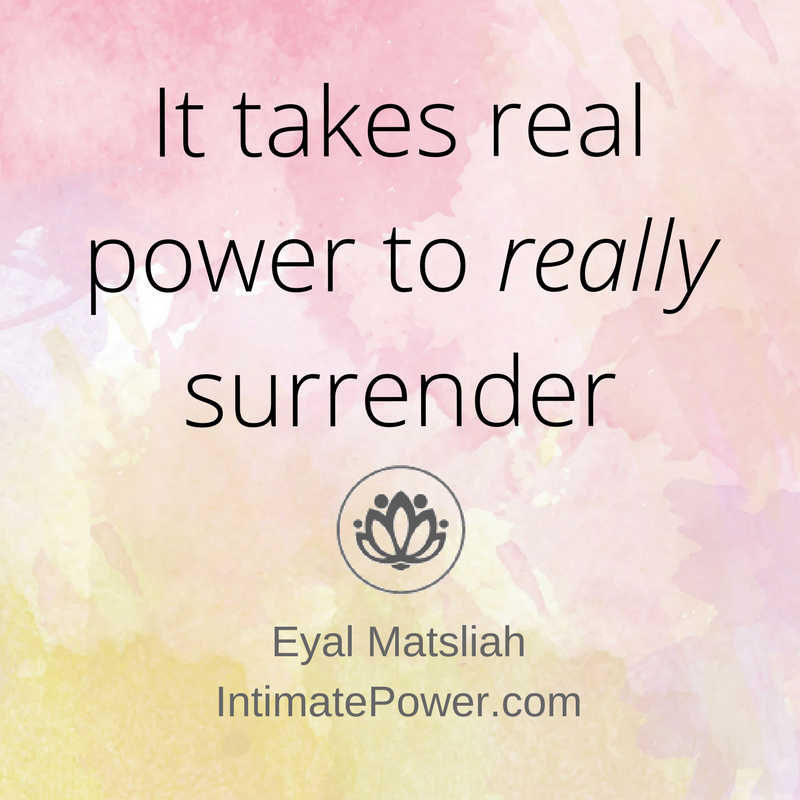 Find the spaces and times that support your surrender.
It might be hard for you to surrender at 10pm after a long day’s work and hours of taking care of the kids.

Instead, consider going on a date, outside the house.
Go to a garden, a park, a hill, or a beach near the house for half an hour and just go into total surrender.

To make it easier to feel and surrender, get into your body before you connect with him.
Walk.
Run.
Jump.
Shake.
Dance.
Self-pleasure.
Meditate.
Have a massage or take a long bath.
Then, once you are in your body, you will draw him into his body, and then, into yours.

Sometimes you need structure in order to surrender.
If it’s easier for you, create some process that helps you surrender.
Turn the phone off, put comfy cloths on, put soft light and music on, close your eyes, take a deep breath and exhale with a sigh. Do that for two minutes.

Suspend judgement, doubt, criticism and sarcasm.
They might still be shouting in your mind, but at least don’t express them.

Let go of your need to understand, to analyze, to remember.
Just accept everything as it is.

It’s not just about your partner, and maybe you don’t currently have a partner.
Recognize who is conscious, trustworthy or experienced in whatever realm you appreciate, and decide to trust their guidance.

It might be a married man or a man you don’t want to be or can’t be intimately involved with.
That’s ok.
Surrender isn’t about having sex or a relationship with that man.
He doesn’t even have to know you exist.
This is about you, not him.

To download this article for easy printing click: How to surrender to your man by Eyal Matsliah – IntimatePower – Final